Well, with the completion of the Palatine-class remodel, it's time to update the Viminal attack ship.

The Viminal gunship was designed by the Thrassi Republic for escort duty of larger ships (Adamant is accompanied by two of them almost all the time), and for fast interdiction of small targets.  But they've also been used as orbit-to-surface shuttles for capital ships, too.

So, without further ado, the update that needs to happen for the ubiquitous Vimmy.

Fortunately, it seems the update to the Vimmy isn't as much work as the Pally.  The Vimmy model is much more modern, and so doesn't require a complete remodel like her big sister did, so that's good.  But, still, it does require some TLC.

After finishing up the changes, I'll probably release this one on Turbosquid. At the very least, the interior should be made available.  It's sat on my hard drive long enough, being neglected... We'll see.  Think I'm overly attached to these silly ships of mine.  Perhaps a therapist is in order. :)

Also, the Nero's Fire, a freighter I worked on about a year ago also needs some TLC.  Since I have a tad bit of free time, I'll probably hit this one and get her finished up.  The only thing that really needs to be done is to finish modelling the landing gear and the loading elevator, and then she'll be ready for public release. 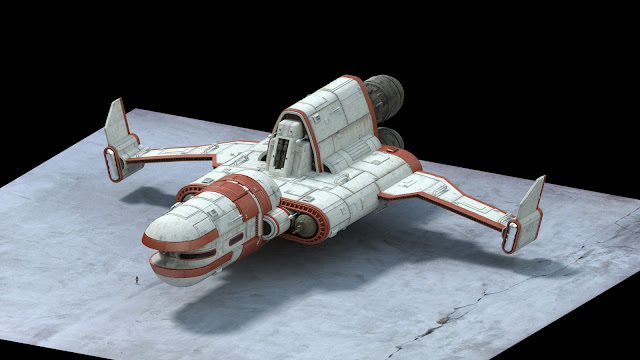 So that's about it for now.  Just thought I'd throw another update on here.

Hope everyone is doing well.  Have a safe week.

Dan
Posted by DanBrownCGI at 8:31 AM No comments:

So, finally finished the public edition of the conference room set and uploaded it. 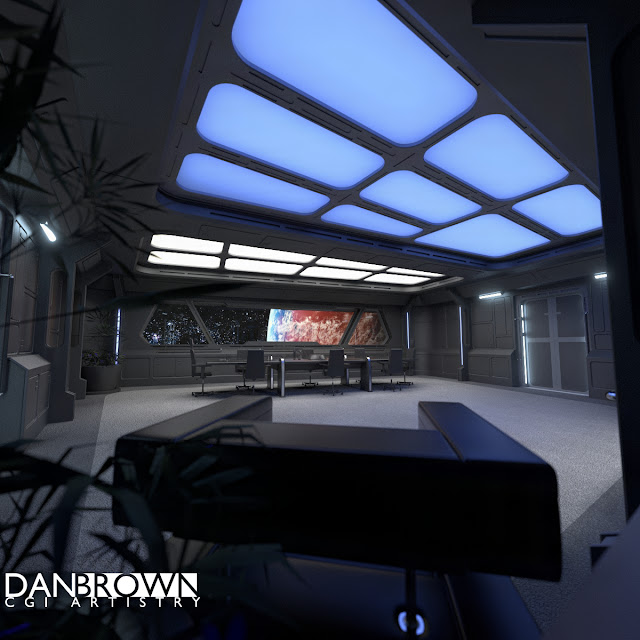 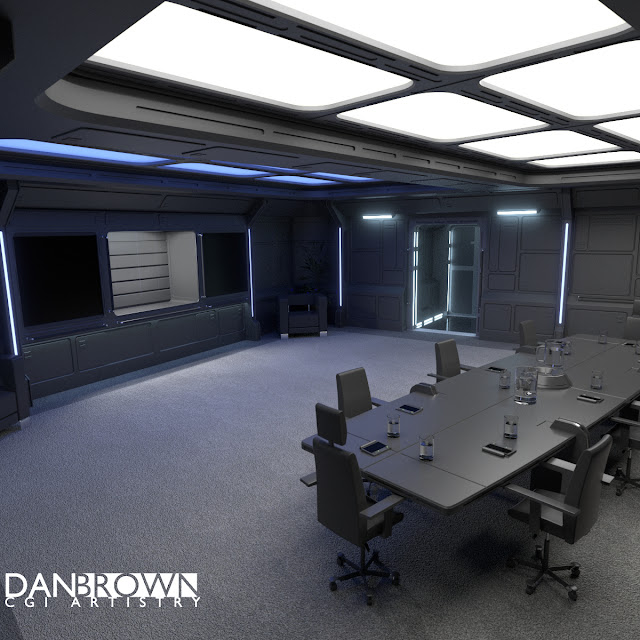 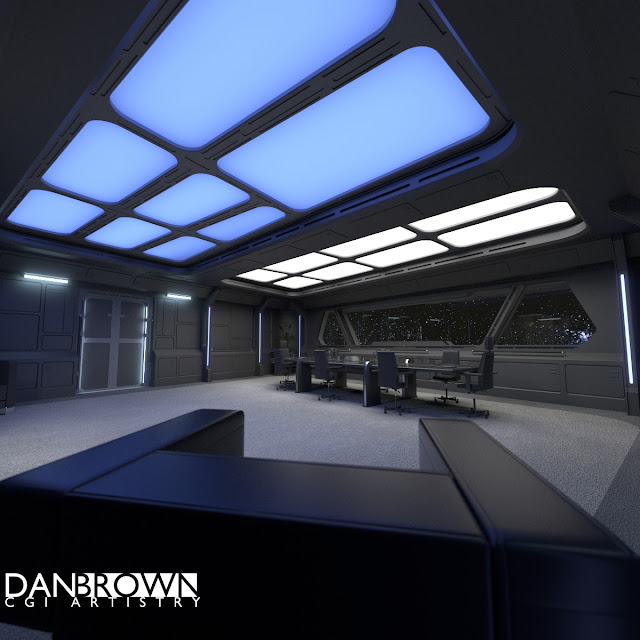 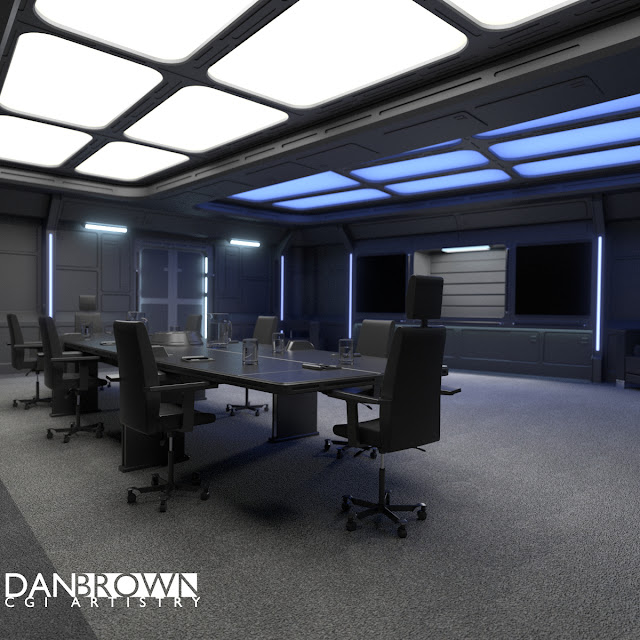 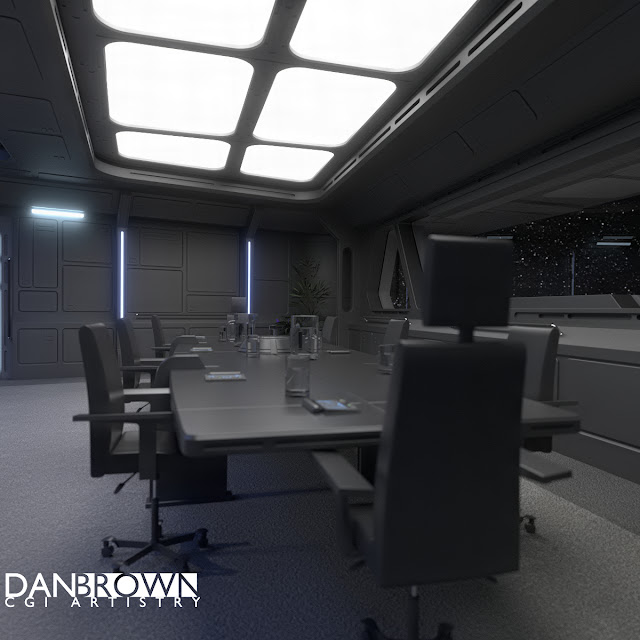 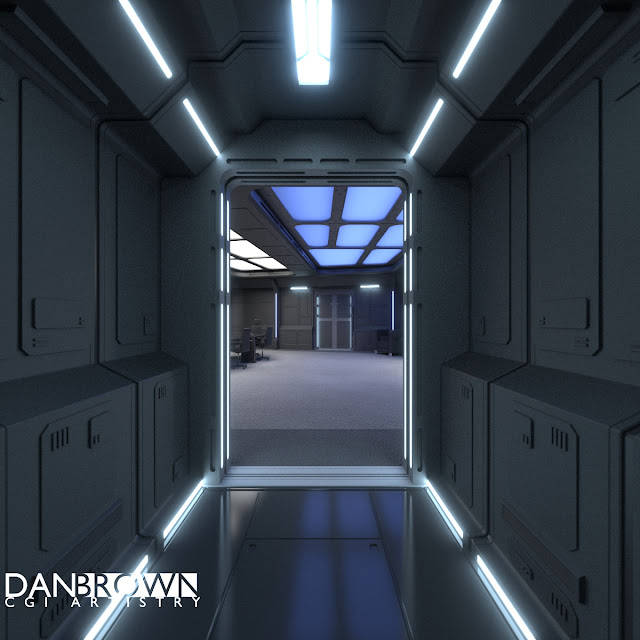 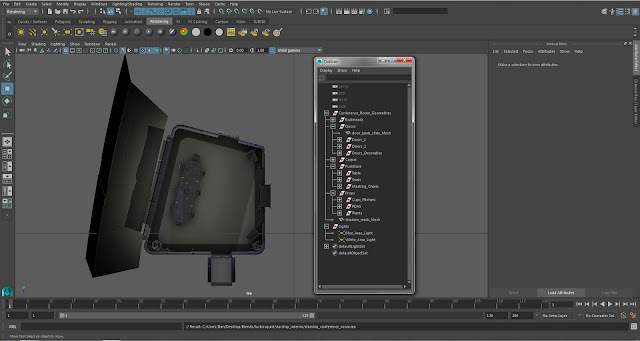 A highly detailed starship interior, suitable for use as a conference room, observation lounge, or officers' mess hall.

All previews rendered in Cycles or Blender internal engines, with post-processing nodes. UV mapping only guaranteed in .blend, .obj, and .ma versions.

-- Optimized for physical based render engines like Cycles or Octane

*Note: Blender scene is automatically set to 'GPU Render'. The background is extremely large and may exceed graphics RAM. If so, select 'CPU Render' in the Render settings, or switch to the lower resolution version of the background.

This is the first time I've put up a triangulated mesh instead of one that tried to stick to quads as much as possible.  Which was a bit of a stressful thing, because tris are...well, rebellious at times, especially with UV unwrapping.  But I think it ended up okay.  I relied on triangles this time because of the modelling approach I did, which was much faster.  I figured that most people who purchase ready-made scene models like this aren't totally obsessed with topology.  We'll see how that goes...

It's also the first time I've uploaded a Maya version from the start.  I'm trying to go back and redo the older products to Maya, too.  But there are a lot of them, and converting them over to Maya can take the better part of two or three days, with all the elements that are in these scenes.  Ah, oh well. :)

So, I put this up here just in case someone on here might be interested in taking a look.

Hope everyone is doing well!

P.S.: And... as soon as I post this, Turbosquid goes down, thus killing my link! Isn't that just the way it works?  Well, hopefully they get the issues ironed out soon!
Posted by DanBrownCGI at 7:08 AM No comments:

Continuing work on the Conference Room on board the Adamant.  Nearing completion, but still have a few details to add here and there.

By the way, if only I had a real life version of that golden Palatine to put in my room...ah, that would be wonderful.

Dan
Posted by DanBrownCGI at 1:23 PM No comments:

Starting to work on the new Adamant's interior.

The bridge shell has changed shape to this, with a human model to give an impression of scale:

It's necessary to redesign the interior of the Command Deck so that it fits.

I also wanted to take this chance to redesign the ship's interior motif, too. I wanted something a bit more menacing and muted. Since the outside looks tougher. To that end, I came up with this test motif:

I'm still not thrilled with this design, and may address some of my concerns. The most notable one is...there's something about it that doesn't look good...I don't know. I know I don't like the baseboard lights. I'm going to get rid of those...the support struts also don't look quite right to me...perhaps they should follow the rounded edge motif of the rest of the design more.

Here is the Officer's Conference Room, directly aft of the Main Bridge, now, instead of to the side like the old design. This is looking to starboard. Left is forward, and that door on the left is the door to the bridge. It is shown in the old Adamant's interior color scheme. I'm seriously considering changing it.

I will definitely be adjusting the windows of the ship for the interior. I'll leave them the same on the exterior, because they're so small that they're fine the way they are. But close up, they're too angular. I'm going to round the edges for the interiors so that they provide more detail for the close-ups they'll be subjected to in any interior scenes on board the ship.

And here is the final color scheme, I think.  I need to add some stuff on the walls, including handrails, displays, door control panels and perhaps a display case for a model of the ship.

All that's left is adding some detail on the wall, including getting rid of the door in this image and adding a table.  I'm thinking on a circular table, with a holographic display in the center for presentations.  If that's the case, I'll change out the ceiling to fit the table. Instead of the door to the left in the following image, I want to put a display of a model of the Adamant (probably in silver or gold).  Right now the room has 3 doors.  The door to the left just leads out into the central corridor leading from the bridge, and 2 doors is more than sufficient for this room.

The table here is probably a bit too big around.   The bridge crew consists of 6 people--the captain, first officer, helm, comms officer, gunnery, and sensor officer.  The chief engineer would likely be included in meetings, too, so, at most, I'd need room for just 8 - 10 seats.

Posted by DanBrownCGI at 2:16 PM No comments: