The Escort Tactics of the Republic

The original intention of the Palatine cruiser was to have it like the starship Enterprise from Star Trek, in that these starships operate more or less without escort and are solo most of the time, just cruising around and cataloguing star systems.

Then I discovered that while the Lathkos Sector universe I created is not as militaristic as, say, Battlestar: Galactica or Star Wars, these ships are very much still military assets and would require escort, considering they're huge investments.  Plus, if one ship is cool on screen, how much cooler is multiple ships all maneuvering in formation?

And, of course, it also gives a ridiculous excuse to show these ships in comparison to each other.  Size comparison is a very important way human beings denote importance, as well as become more familiar with objects. 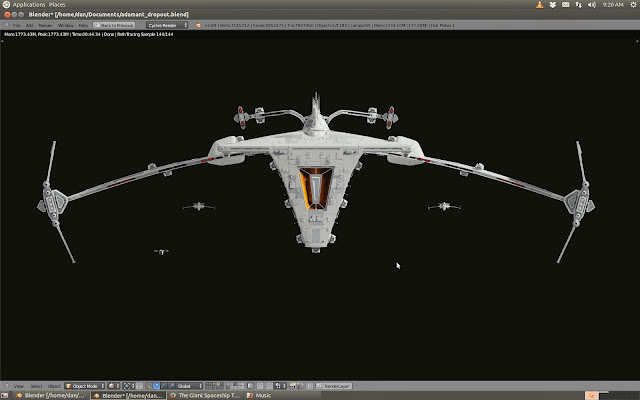 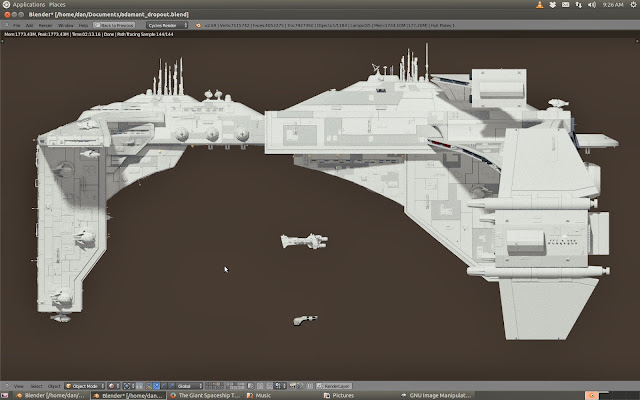 All of this destructive power in this small tactical group is under the command of one man, the captain of the lead ship, in this case, Adamant.  There is little wonder that captains of Palatine cruisers are known for their serious, almost solemn personalities.

Smiles and joviality aren't really an option when you're controlling a platform with enough fire power to obliterate a planet flying at 10,000 meters per second.

Dan
Posted by DanBrownCGI at 7:12 AM No comments:

Started working on elements for the interior of the Viminal class gunship.  The key is to create interesting shapes which are very modular.  The more these shapes can be copy/pasted throughout the model, the quicker the modelling process goes.

For the rooms and compartments next to the outside hull (especially with windows/portholes), more specialized modelling has to happen, but usually most of the same bulkhead modules can be put into most of the room.  This greatly speeds up modelling time. 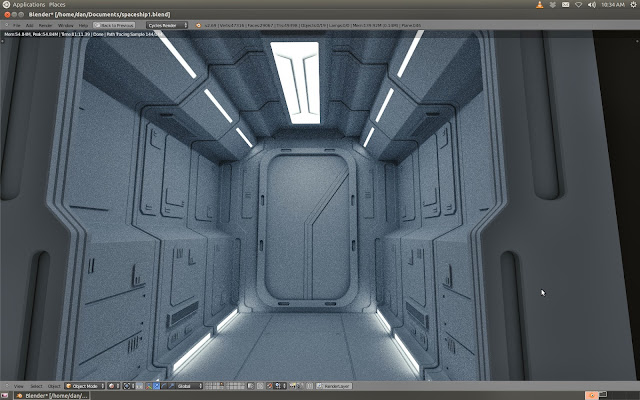 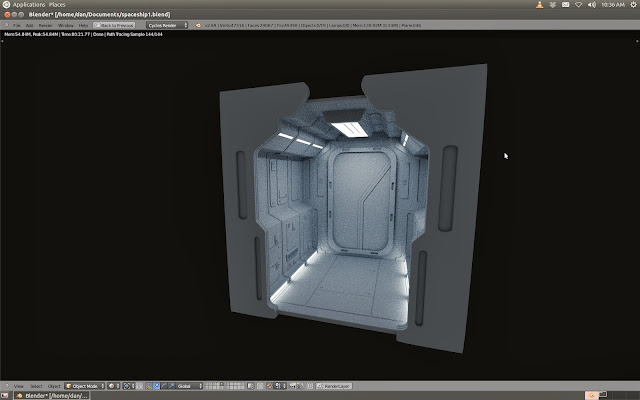 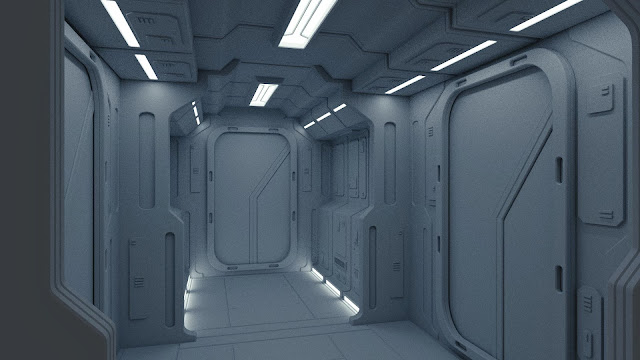 After that, I just hope it all fits inside the ship when it's done.

Dan
Posted by DanBrownCGI at 9:35 AM No comments:

More greebles need to be added, I think...

Dan
Posted by DanBrownCGI at 1:10 PM No comments:

Working on a name for this class of gunship.  Keeping with the tradition I started with naming the Thrassi ships after the seven hills of Rome, I'm probably aiming for a name like the Viminal class gunship.

This ship is very Thrassi in its design mantra.  The Thrassi Republic (or, TR) has always been strapped for cash, so it decided to invest in a million little ships like this one over having a few large ones.  The Thrass also have the most planets to patrol, so having a multitude of small ships was smarter for them.  I imagine they built a lot of these Viminal gunships, probably numbering into the tens of thousands of them, to patrol backwater systems and provide escort for larger ships, such as the Aventine destroyer and Palatine cruiser.

These gunships were basically just lightly armored, yet extremely fast and deadly heavy sluggers, meant to carry as much fire power as possible right into the enemy's face.  While the TR never designed multi-person ships to be expendable, this ship probably had the highest casualty rate in any of the skirmishes the Navy had with pirate factions or with the Trisst Empire.

As the years wore on, however, these ships were probably retired from naval service and sold off to the private sector for either scrap or to be used as patrol boats for major corporations or personal ships for private citizens.  Really, the only ships that remained in use for any length of time in the TR were the Palatine cruisers, and even then, only five of the original twenty built were in active service after thirty years.

They probably kept building new Viminal gunships over time, however, to replace the older ones.

The upside to building ships for the same fleet is that you can reuse certain greebles and detail geometry in the new chassis.  This is a huge time-saver, as evidenced by the fact that this ship's exterior is nearly done already, despite me just starting a couple of days ago.  As the greeble library expands, and my familiarity with the hull plating technique gets better, I'm glad to see that the time to build these ships is decreasing precipitously.

Dan
Posted by DanBrownCGI at 6:59 AM No comments:

Started work on a gunship. 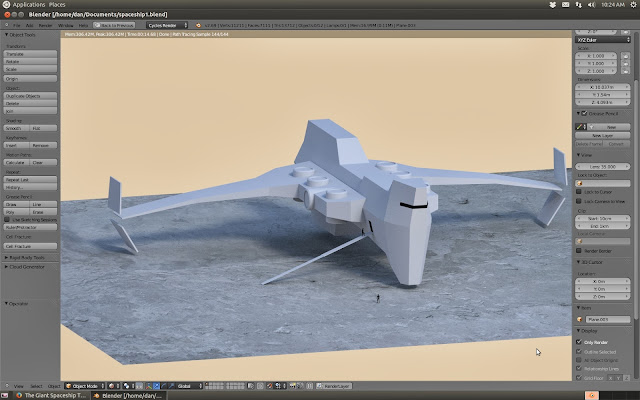 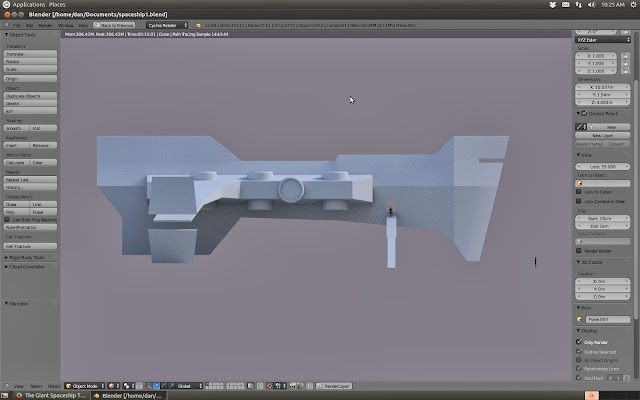 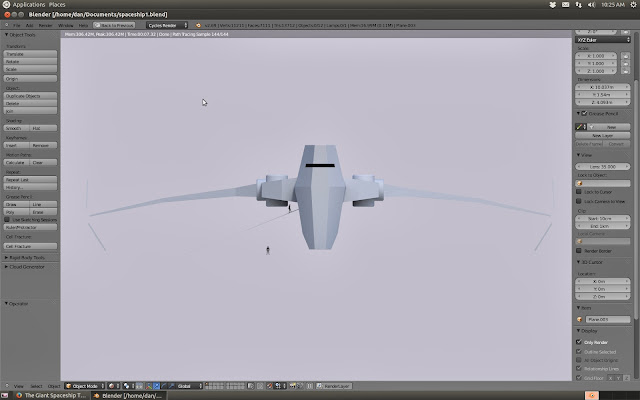 The round spots on the top and bottom are where the gun turrets will go. Probably will have the warp drive winglets fold up and down like on the Palatine class. This ship was designed to be just a fast, powerful slugger with minimal armor. Its speed and atmospheric capabilities are its best defences. Its main armament is six heavy blast ionized particle cannons, the much smaller version of what the Adamant is armed with. It was designed to fly into enemy lines and pick off turrets and exposed hardware.

They were designed and built around the beginning of the 20th century of my universe, however, and as such, their age is now very evident. As such, they were sold off to private contractors and owners beginning around the 80's. Now they're mostly just owned by private merchantmen and mercenaries. To fly this ship in Thrassi space, however, you have to have a license for all those guns. Unfortunately, some of these have found their way into the hands of pirates in the outer systems. They're usually easily destroyed, though, if the Navy sends in a Palatine class cruiser to deal with those pirate scum.

Dan
Posted by DanBrownCGI at 7:47 AM No comments:

Still tinkering with these two rooms.  The third in the set, the conference room, is unchanged from the original, so I decided to not show it.  The bridge itself is still very much a WIP.  I'm struggling with the consoles and really dislike them.
Posted by DanBrownCGI at 6:53 AM No comments: