Well, I've been going to the gym lately, and I've noticed that everything looks better with some thicker muscle on it. =D

I've been taking a hard look at the Adamant, and there were a few things that bothered me about her.

I think someone pointed this one out to me, but I ignored it--probably because I'm too proud! =\ The wings are far too flimsy looking. Whereas the rest of the hull is armored like a turtle, the wings are these wafer-thin things that look like a toothpick could tear through. So, in an effort to beef up the wings a bit... 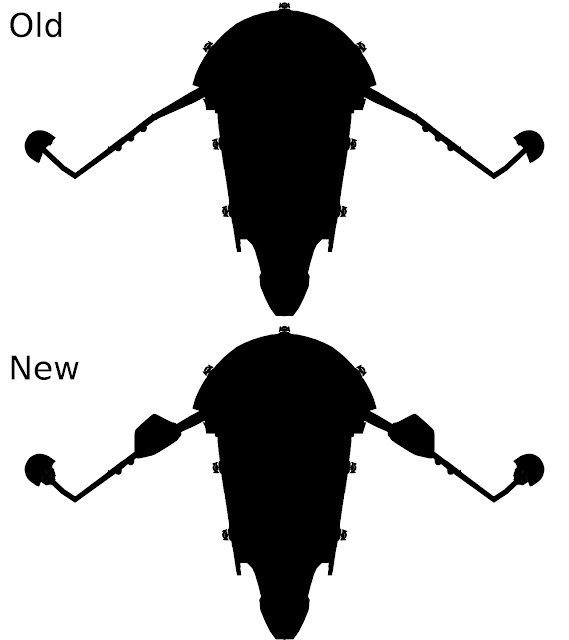 Obviously, I wanted the ship to look a bit more feminine than the Sacrilege or Maller which is the basis for the design, however, I also wanted the ship to look like it could withstand some punishment if battle were unavoidable. The wings really compromised that look. With a few minor alterations, though, I think we can get her to look a little more muscular than what she currently is. =D 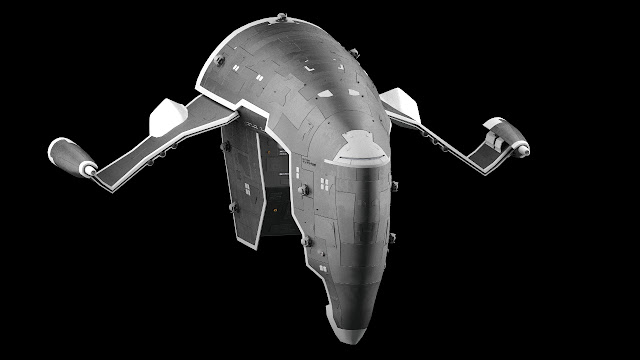 This seems to go a long way to getting those wings in better shape.

Posted by DanBrownCGI at 5:07 PM

The Sacrilege and the Sovereign

I've been working on converting my two favorite spaceships of all time into Blender Cycles. =D

First, the Sacrilege! This is, by far, the baddest ship in Eve Online, as far as I'm concerned. It is also, obviously, the inspiration behind the Adamant. =D It makes the Adamant look silly and amateurish, as far as I can see, but oh well.

The model was imported from the game itself. It's been a bit of a challenge getting all the textures and whatnot to look right, and I've still got a little bit to go before I get it perfect. Obviously, I didn't make it, and it's really got no place here for the most part, but I just thought I'd put it up to show off that I haven't been completely lazy. =)

The second is something I've been working on for a LONG time. This is the model Paul Trenkler made of the Enterprise-E, the awesomest Enterprise, by far. =D It was originally modelled in Rhino, and then saved in .max format. I had to download a trial version of 3DSMax just to get to open the file. And then to export it took a bit of tinkering, which I actually can't remember even how I did.

Then, of course, there was importing it into Blender. Keeping in mind, this is back in the day when Blender was still around 2.3x, and I was using a Pentium 4, it took all night to convert the .3ds file into .blend. In the morning, imagine how thrilled I was to see Paul Trenkler's Sovereign, a ship model I had drooled over for a long time, sitting there, ready for me to play with. =)

Then came the arduous process of texturing the thing. This is the result (in Blender Internal):

And here is the Cycles version, which, in turn, calls on me to once again, completely re-texture! 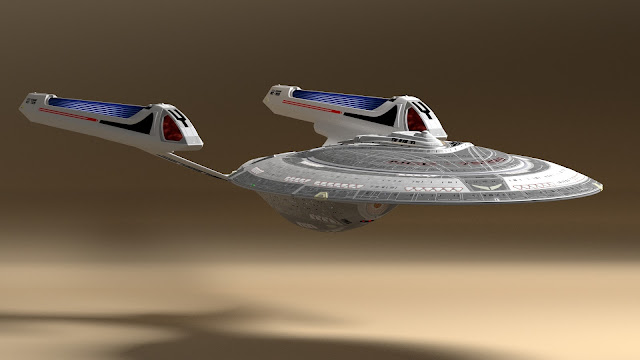 Finally, since I feel that scale comparisons make things more interesting, and more real, here is a scale comparison of the Sacrilege from Eve Online and the Sovereign class starship from Star Trek. 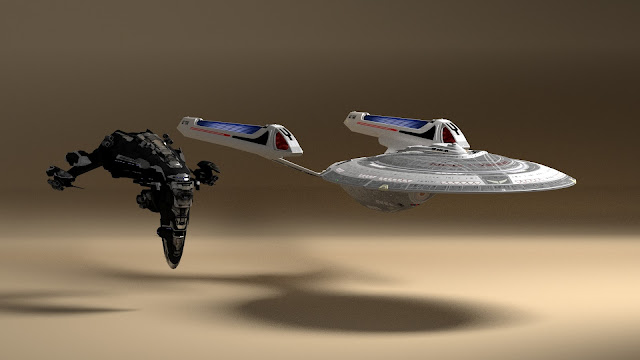 What do I like to see in spaceship design? I like sleek, masculine designs, which are unorthodox, and are powerful looking.  However, I believe that all machinery and vehicles ought also to express an artistic flair to them.  The finest cars, I feel, down through history have been those that stand out stylistically--smart, beautiful lines and fascinating curves which look good from many angles.  I appreciate Lamborghini more than Ferrari, not because they are necessarily better built cars, but because I like the more sinister edge the Lambo designs have.

To me, the Sacrilege and the Sovereign represent the pinnacle of spaceship style for much the same reasons:

Someone's in for a world of hurt. Aren't you glad it's not you? When these ships are angry, you know it.  They bristle with power and menace.

In the end, this is what I love about these particular designs of starships, and what I would love to be able to produce on my own, had I the talent of the artists who designed the Sacrilege and the Sovereign.

Dan
Posted by DanBrownCGI at 10:40 AM