Dan
Posted by DanBrownCGI at 9:50 AM No comments: 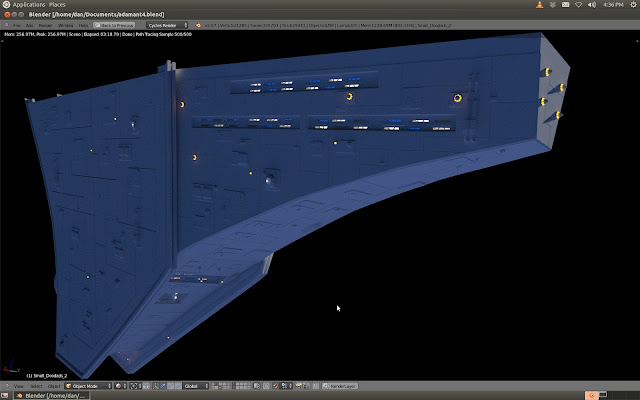 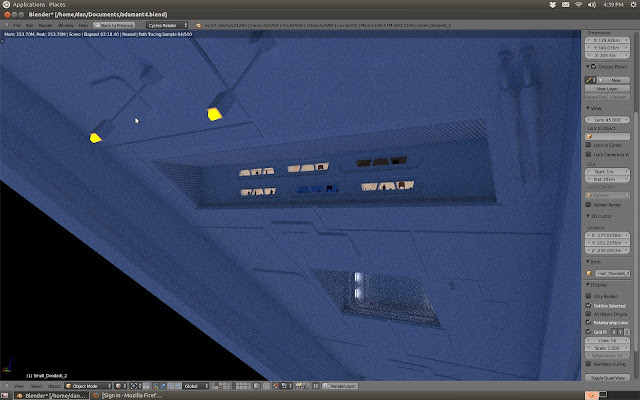 Windows, complete with interior sets and little tiny people to give an idea of scale.

Dan
Posted by DanBrownCGI at 7:25 PM No comments:

Well, not being pleased with the old Adamant, nor with Adamant II, or Adamant III, we're onto Adamant IV.  She's almost a kilometer long, now, but her lines are more pleasing and she's quite unique in her design, now, hopefully.  I like the flow of the lines, now.  She's less bulbous and more sleek.  Concave curves galore! 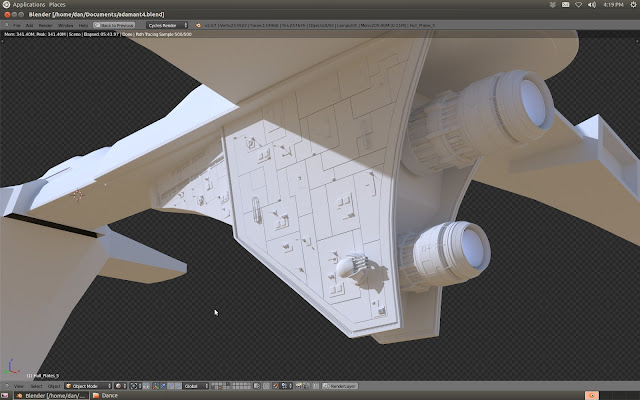 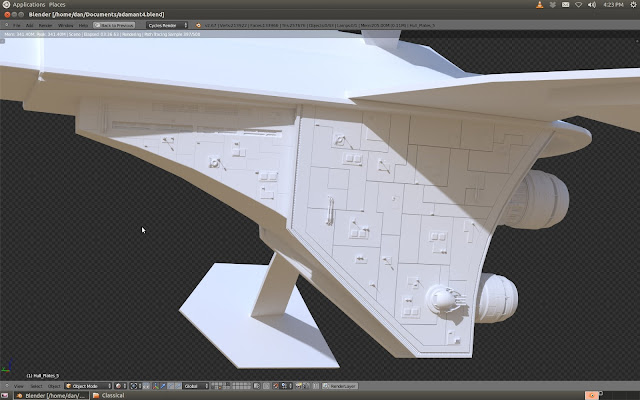 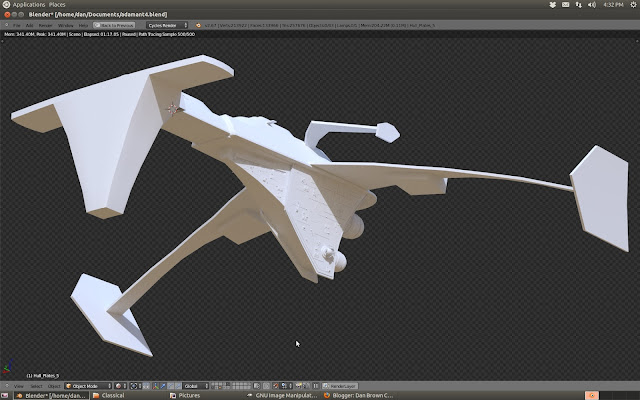 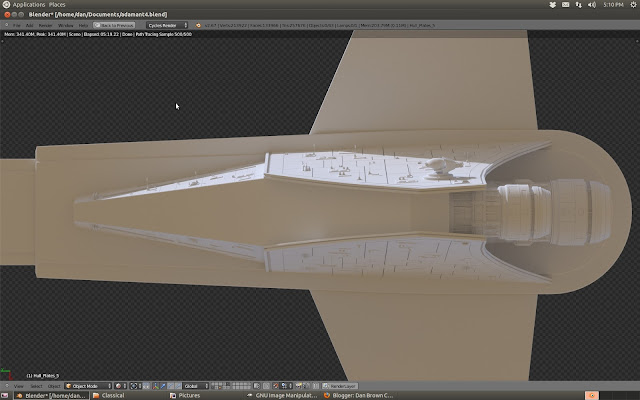 Posted by DanBrownCGI at 2:16 PM No comments:

Putting Salt On the Inspiration

Salt is a preservative.  But it also is a flavor enhancer.  When inspiration strikes, I find a great way to make it sweeter, or preserve its longevity is to write fictitious encyclopedia articles about what I'm working on.  I know.  It probably sounds like the stupidest thing you've ever heard of.  But try it one day, and you might find you like it.

This does two things: it gives me an idea on what the project's character includes.  Makes it more personal, making it more appealing for me.  It also keeps my interest in the project going further.  Why is that detail there?  What does that particular greeble do?  So I add a bit of exposition in an encyclopedia.  If it doesn't work, I change it.  If it still doesn't, get rid of the detail on the 3D model.

I call it The Encyclopedia Lathkosia.  It's about 100 pages, I think, now, and features pictures of the topics.  Most of the headings are still under construction.  Here is an excerpt from my most recent addition, which was an article about Captain Lostra I wrote while working on "The Starship Captain".

Lostra's command of the Adamant has the distinction as one of the greatest missions in Thrassi naval history. Time and again, while in command, Lostra proved to be a cunning, quick thinking starship commander, with a particular knack for staying cool and calm under extremely dire circumstances and in the face of intense provocation and persecution. His cool demeanor under pressure earned him the nickname “Ice-cold Lostra”. His legendary levelheadedness permitted him the uncanny ability to make brilliant command decisions despite incredible pressure in both time and space.

It was during Lostra's command of the Adamant that that vessel took part in the search for the Drannica, the infamous star liner which disappeared in 1,912 M.E. Adamant discovered the wreck of the Drannica, but was nearly lost in the process. Lostra himself describes their harrowing crash entry into the same rogue asteroid field which had claimed Drannica 100 years before:

“I remember being awoken by a call from the command deck at about 1 hour ship's morning. When I arrived on the bridge about a click later, I discovered that the ship had automatically scrammed out of warp speed due to a large gravity well directly ahead.

“I ordered a scan directly forward, but Scan [the sensor department] could not make sense of the readings due to general lateral movement along multiple trajectories. I ascertained from this report that we had happened upon a rogue asteroid field and quickly ordered the ship to reverse direction and to fire the aft engines as hard as possible to slow our approach, as we were moving toward the field at about 40,000 killos per hour—residual speed from Adamant's general post-dropout inertia.”

Commander Tosham, the first-officer, was on the bridge and adds:

“I remember the tension on the bridge at that point was starting to mount. The general sense one got was that we were in trouble, but we didn't anticipate how much trouble, though the captain knew. He never lost his composure during the entire thing, and never even gave a hint of fear or uncertainty. He simply addressed each threat in a very mathematical and dispassionate manner.”

“We fired the main engines for as long as we could, and then turned the ship forward again, to bring her full weapon systems to bear on the encroaching [asteroid] field. Our velocity at this point was still around 15,000 killos per hour. I ordered all forward thrusters to full stopping power, simultaneously commanding Gunnery to direct laser cannon on all lateral collision threats deemed higher than 30 percent. The lateral threats were deemed more pressing as Adamant's forward destructive potential at the time was nearly 20 times that of her lateral potential. I intended to destroy any rocks flying at us from the side first before directing all weapons forward to deal with the front threats, as these could be dealt with in as few as 2 or 3 volleys.

“In 10 volleys, we had reduced the lateral threat to less than 20 percent, with only one small rock getting through to strike the forward section armor. We entered the field under full reverse power shortly after the first forward volley had cleared enough of the rocks to avoid any catastrophic collisions. I ordered clearing of some additional lateral threats until Commander Tosham enthusiastically directed my attention to a very large asteroid directly forward which was deemed a 100 percent collision threat, and I ordered full weapons-free on that target. I remember Tosham's eyes in that moment. They were the widest I'd ever seen them. I never saw Tosham—usually a very levelheaded fellow—as frightened as I did on that day.

“The Adamant's full destructive might split the rock—which was the size of a 20 killo high mountain—clean in two. We shaved as much as we could from the nearest edge as the two halves moved apart, but it was not enough. I therefore ordered 'collision alert' and had the hands brace for physical impact.

“She [Adamant] struck on the starboard side at 210 killos an hour relative to the collision object, crushing and obliterating the fifth through seventh decks in the forward sections. 10 of the crew were unable to escape in time and perished instantly upon collision. Had the rock been moving toward us instead of away, she would have struck head on at least going 10,000 killos per hour. It would have completely destroyed the ship. We were actually very fortunate that the rock was moving at the speed and trajectory it was. I ordered a standard porting maneuver around the rock to avoid damaging the delicate equipment on the aft, and we cleared the remainder of the ship without further appreciable damage.

“After passing this ordeal, the ship finally achieved full stop relative the field, and I ordered a clearing of the general vicinity using the lasers to give us some breathing room. It became clear upon scanning the field that we were trapped. The entire entry into the asteroid field transpired in less than what I estimate to be 2 clicks.”

Captain Lostra received the Meritorious Service Star for his actions in this incident. It was the first of 4 times he would be awarded this particular honor, each time saving the Adamant from what should have been almost certain destruction. Each time, the citation prominently credited his cool, methodical approach to his successfully handling the situation.

What does this do?  Look at the picture of Captain Lostra again.  Now there's something more about the character that we didn't know before.  Now the room he's in, his office on the Adamant, takes on new meaning.  Plus, I'm interested enough in the project still to do more work on revamping the Adamant model again, which is an ongoing project for me and one I've abandoned due to disinterest more than once.

It's also a great diversion from TV and YouTube, where my mind is forced to do the work instead of letting someone else think for me, a fate I deplore worse than death.

Dan
Posted by DanBrownCGI at 6:15 AM No comments: