I know it's been a while since I posted anything, but I'd like to show what I've been working on.

A few projects early this year.  Two Star Wars projects beginning this week to hit.  One, hopefully, to win the Fan Film Challenge on starwars.com.  We'll see.  It's pretty awesome to be included in those projects.

As for paid client work, continuing process of making high resolution print-ready images for a novel, "Reality", by Daniel Liut.  Since it had to mimic preexisting artwork that was made in a traditional paint medium, I had to add a somewhat "painted look" to the images in post-production.  The client has been happy so far, and so I'm pleased.

I'm pretty proud of this stuff. 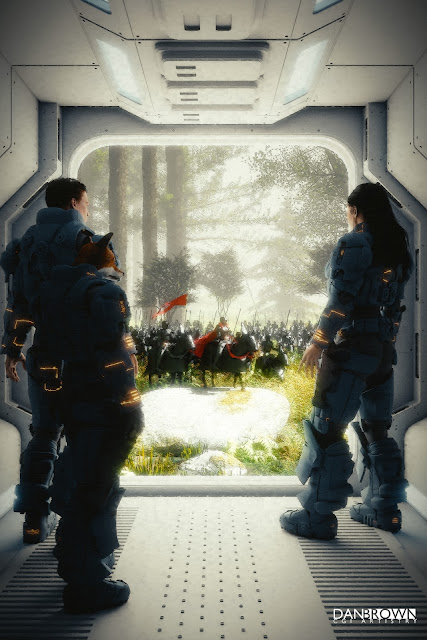 Final version of what is temporarily called "Plate Z", and I call "Facing the Knights".  The directions for this piece indicated a scene where three of the main characters stand in an open hatch of their starship looking out at an army on a planet that has achieved only medieval state of development.  It was encouraged to emphasize the difference between the two worlds, so I decided to use luminary contrast: the darker interior of the super advanced starship's airlock against the lurid sunlight and fog of the natural forest beyond.  Also, the harsh, non-organic nature of the ship's interior against the softer, more natural designs of the alien armor was used to highlight this contrast.

Several elements to this image.  The first is the foreground elements, which included the starship interior, which is standard 3D modelling for me and was completed extremely quickly. 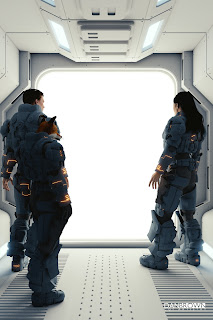 The characters in the foreground plate were preexisting meshes I had laying around.  They're just the same 3D models I've always used for any project I need to use characters in--Daz Studio Michael 4 and Vicky 4 models that were imported into Blender years ago and still hold up under scrutiny to this day, so I continue to use them.  The fox-like alien was the most challenging.  I had to go ahead and purchase a fox body model and then place the head on the top of the humanoid model.  This took several days of prep work and weighting, but I was relieved the same armature worked for both models pretty simply.  It's not pretty, but we were under a crunch time, and it worked.

The background is the same story about the characters, but the forest scene was constructed using plant models I had laying around the computer and several assets downloaded off of Blend Swap.

This was a few days of work to get it to look at least partially right. 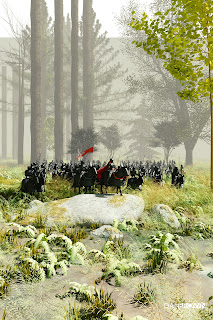 Not much to look at without the corridor hiding all the bad stuff, but there's little point to filling out stuff that won't be seen in the final product, so I just put this out there.

The final product was this, before the post production paint effects in Gimp: 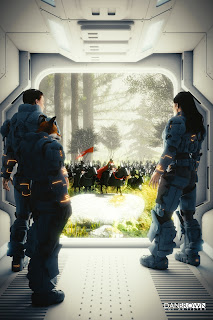 A strong vignette effect was added to amplify the darkness of the interior sections of the scene, and direct the viewer's attention to the center of the scene, where the alien commander and his standard-bearer stand on the rock.  This was intended to highlight the impression the character's line of sight and where their attention is--the unknown threat.

The second shot was actually the first I did for the book project.

"Falling Towards the Intrepid" 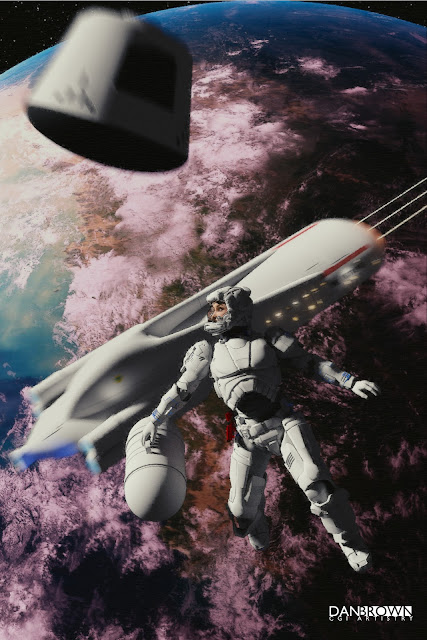 This involved something I enjoy doing: starship modelling.  The design of the starship was already complete, so all that was necessary was the actual modelling itself.  While not exactly the shape of the original, it was effective for the shot and the angle we see it from sufficiently masks any issues with the over all shape of the ship.

The client requested that the scene depict the main character falling toward the starship in the background. This is difficult to accomplish in any still image, but in space it's even more complicated because things are so far apart and appear static.  Therefore, a subtle motion blur was added to the background ships (but not the planet or the character) to impress the idea of plunging toward the ship below.  While not 100% effective by itself, I am grateful that all the images will have small captions underneath in the final book.

The background, of course, was a simple planet model I adjusted from an earlier project.  The character model was the same as the model in Plate Z, but, of course, was modified because it represented a different character.  The capsule was also a model I built.  A subtle blur effect was added to give the impression of falling toward the ship.

Hopefully everyone enjoys this.  I appreciate the client allowing me to show this work on my portfolio.  Hope everyone is doing awesome.

Dan
Posted by DanBrownCGI at 1:52 PM No comments: