Computer Troubles Are Over!

Well, I had some computer troubles!  I installed Windows 7 last week to play Star Wars: The Old Republic as well as to use the Unity game engine for my new job, and 'lo and behold, Linux no longer boots.  Turns out Windows likes to play around with the boot sector of hard drives and told my computer that Linux simply didn't exist any more!

Thanks to a nice boot CD-ROM, I was able to fix GRUB and now Linux boots nicely.

Ahh, the wonders of the digital age. =)

So, back to rendering the movie and back on schedule with Plagarus! YAY!


Dan
Posted by DanBrownCGI at 7:40 AM

Well, the movie was a bit of a hit, actually.  That's a pleasant surprise! =)

It ended up on the www.blender.org website for a day and a half thanks to Bart, from Blender Nation, noticing it.  Thanks to that, the movie got almost 5,200 views on April 10th, with the 11th seeing an additional 1,000 views.  That felt nice to see people looking at something I made. =) 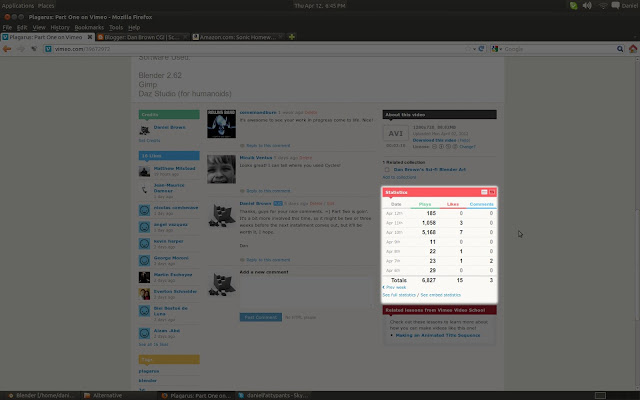 The movie has received far more hits on Vimeo than on YouTube, but I put it on the Tube because some had trouble seeing it on Vimeo.  So here is the link to Part One on YouTube, just in case. =)

One of the chief complaints people had about Part One was the quality of the vocals.  The recording quality was low, as I used a cheap microphone in a noisy environment.  My friend allowed me to borrow his better microphone, and I'm looking into building a small audio isolation booth.  I looked into how expensive these booths are, and the cheapest is usually around $1,000 (US).  That's way beyond my budget, unfortunately.  So the alternative is to build a small booth around the microphone itself.  This can be done for as little as $10, but the quality is probably not going to be very good.  A much better set-up can be done at around $40, which is probably what I'm going to do, so that the dialogue for this movie and any future ones will be as high a quality as I can get on a shoestring budget.

Hopefully it all works out.

Rendering and animating Part Two as fast as I can. It should be uploaded in a couple of weeks.

Hopefully everyone is doing okay.
Posted by DanBrownCGI at 3:59 PM

Yay! Part One of the short film Plagarus is done! =D  Starting work on Part Two.

Hope you all have a great week!

Dan
Posted by DanBrownCGI at 6:59 PM