CGCookie asked me to do another tutorial for them.  Here it is.  This one ended up much better, so I'm pleased. 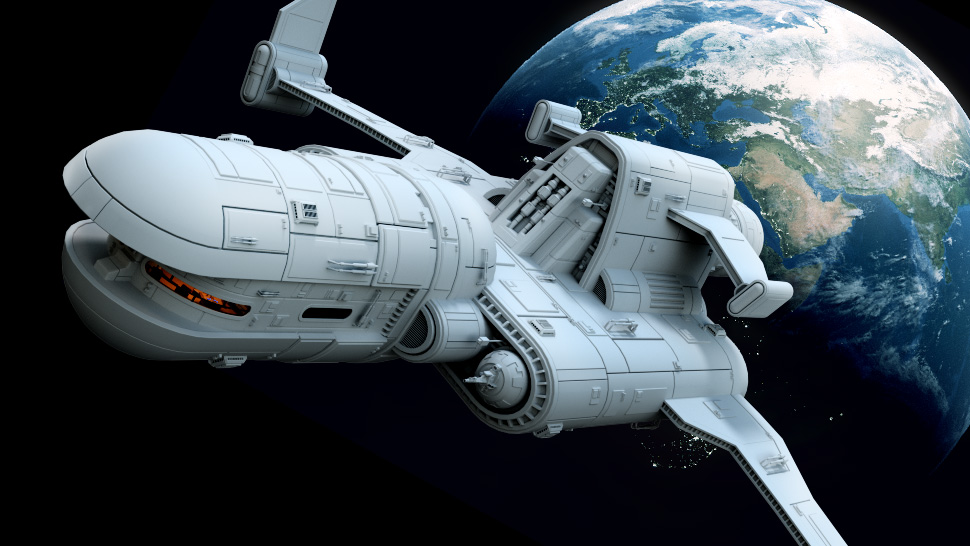 Hopefully it helps everyone.

Thanks,
Dan
Posted by DanBrownCGI at 8:40 AM No comments:

Hopefully it helps everyone out. 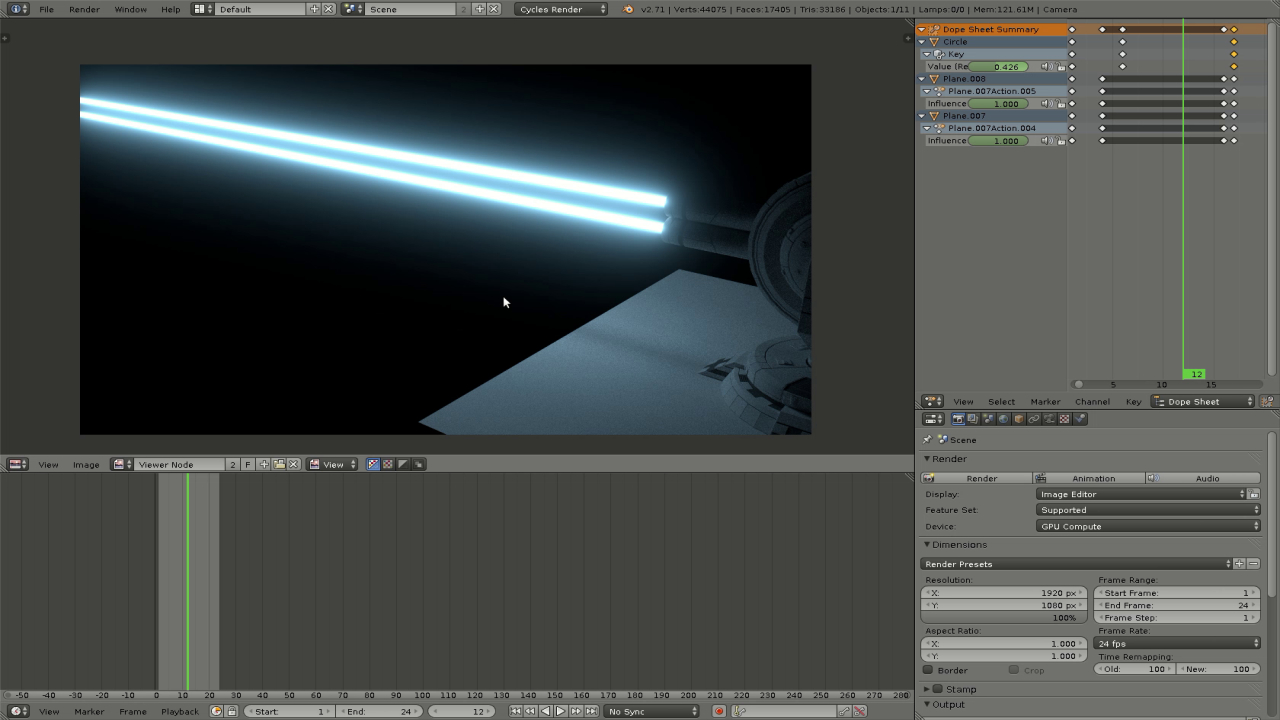 Please note: You'll need a paid membership to CG Cookie to download the files.  I didn't know this when I made the tutorial, and so the tutorial reflects that ignorance on my part.  But at least it gives an idea on how to do the effect, and hopefully everyone can get something out of it.

I'll see about releasing the laser cannon mesh on BlendSwap, though.

I guess I must have done something right, though, because they've asked me to do another tutorial for them.  Let's see how this one goes, now that I've learned from the mistakes on this one!

Best regards,
Dan
Posted by DanBrownCGI at 9:51 AM No comments:

A few years back, I wrote a movie called Armranath.  It's still the best thing I've ever written, and it's not bad, as movie scripts go.  It'll probably never be made, but I might just put it on Deviant Art one day, just so anyone who cares enough to trudge through a 2 hour script can read it.

Anyway, almost all of the action takes place aboard an aging space freighter captained by a middle aged Thrassi man named Seranno Nero.  Since he owned the ship at the time, he named it the Nero's Fire.

I've had a few iterations of the ship over the years, but nothing I was really satisfied with.  I've been working on this on my free weekend time (which isn't much), and finally, now that I've got my computer up and running again, I've gotten my chance to show how she looks so far. 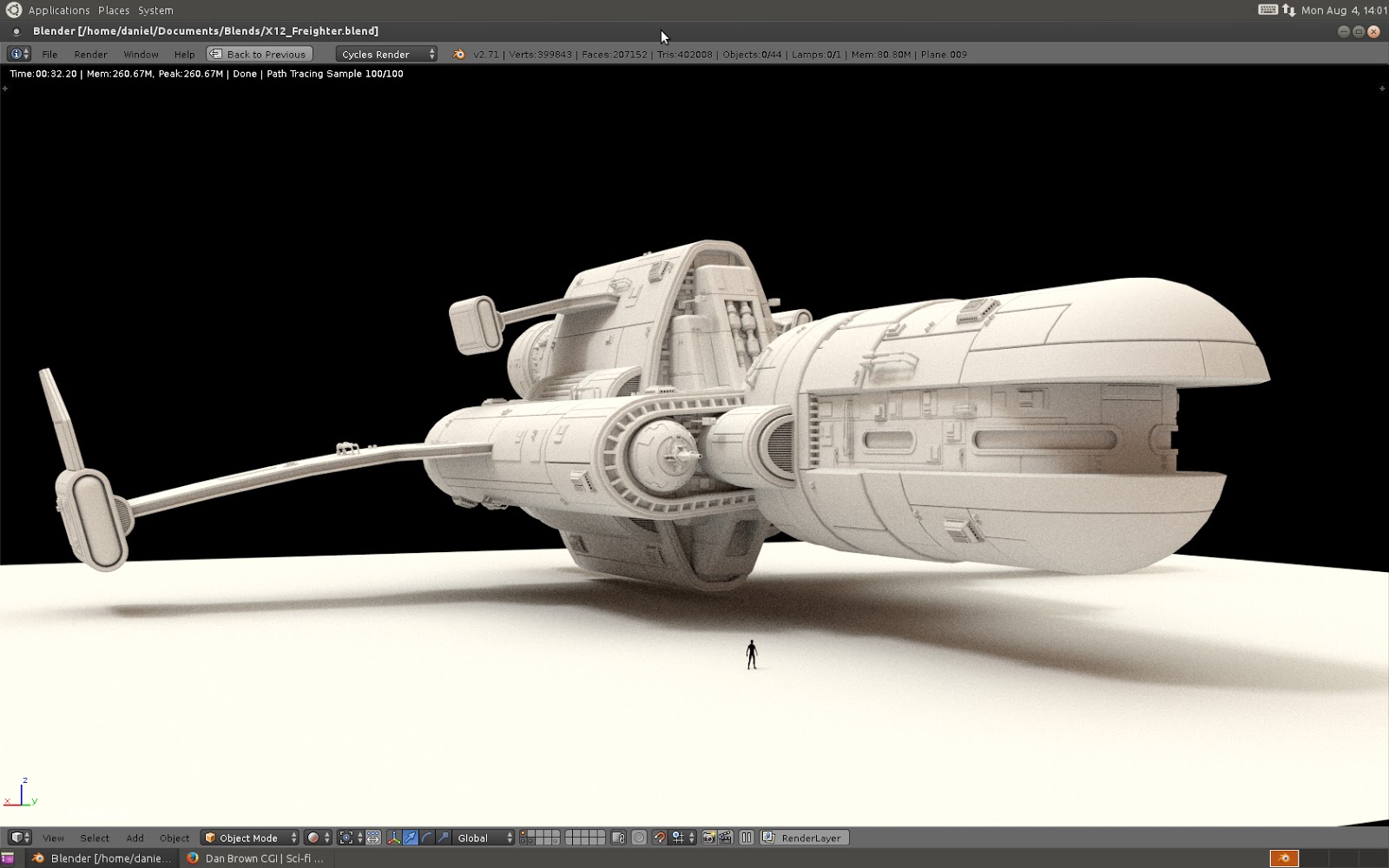 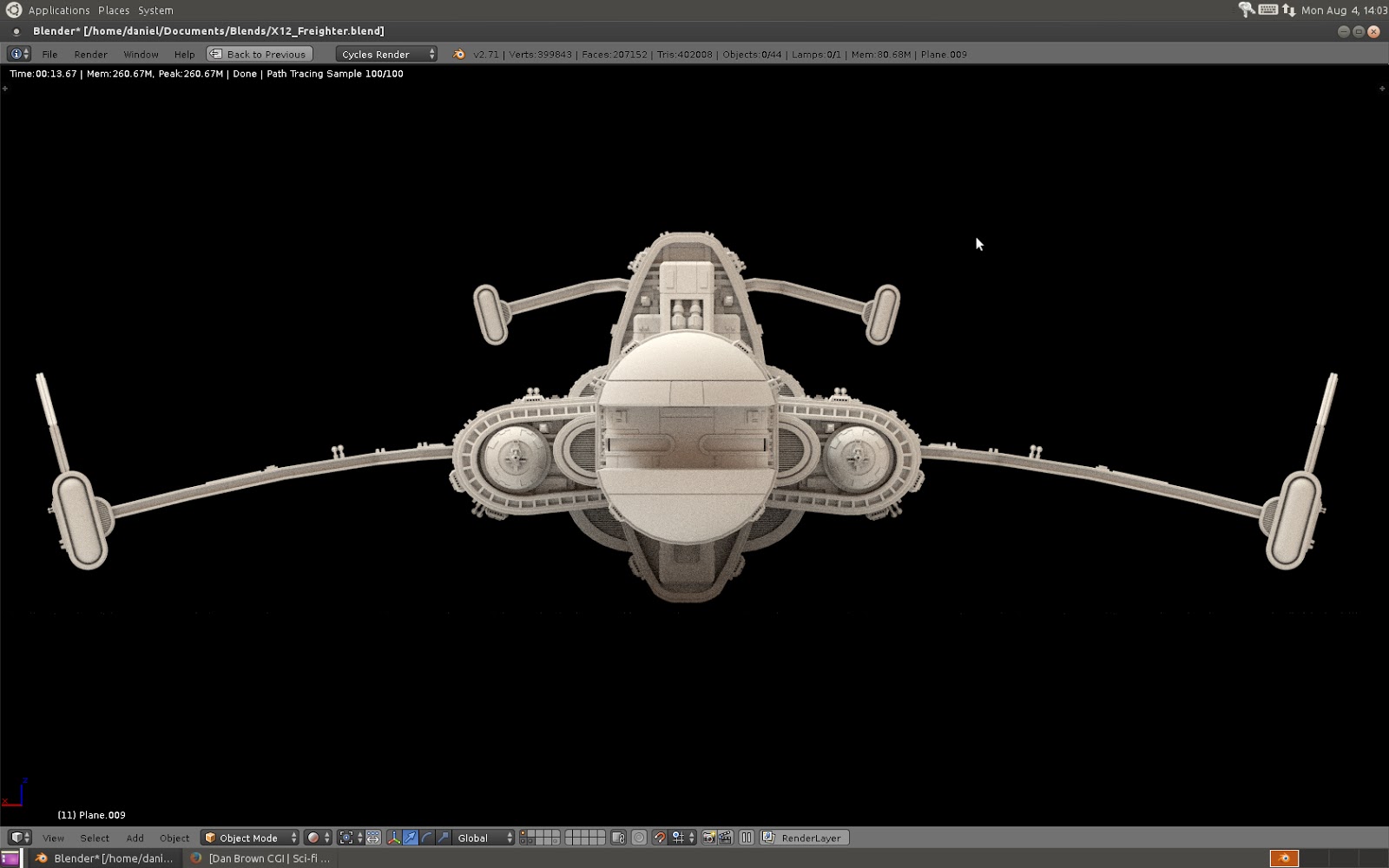 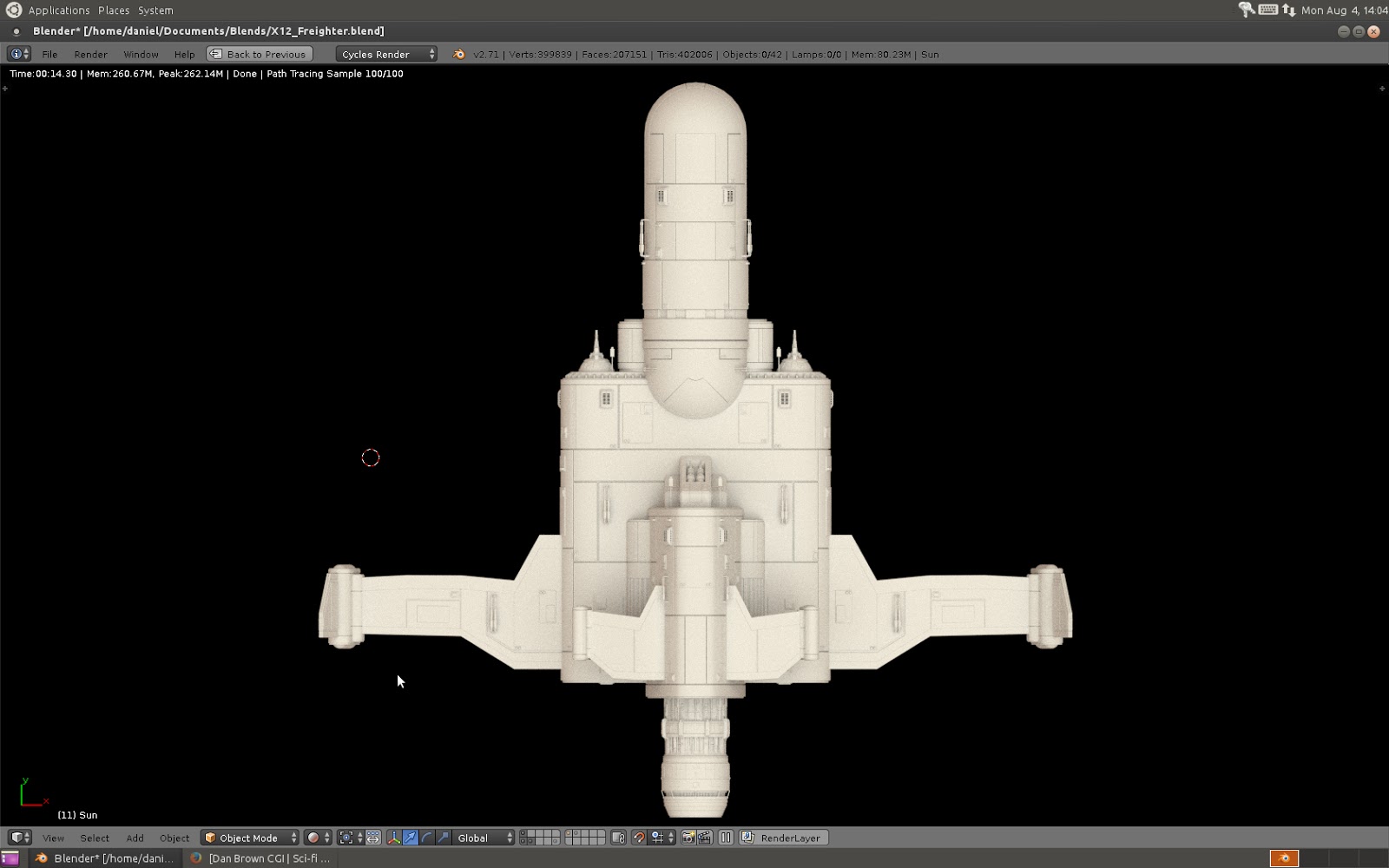 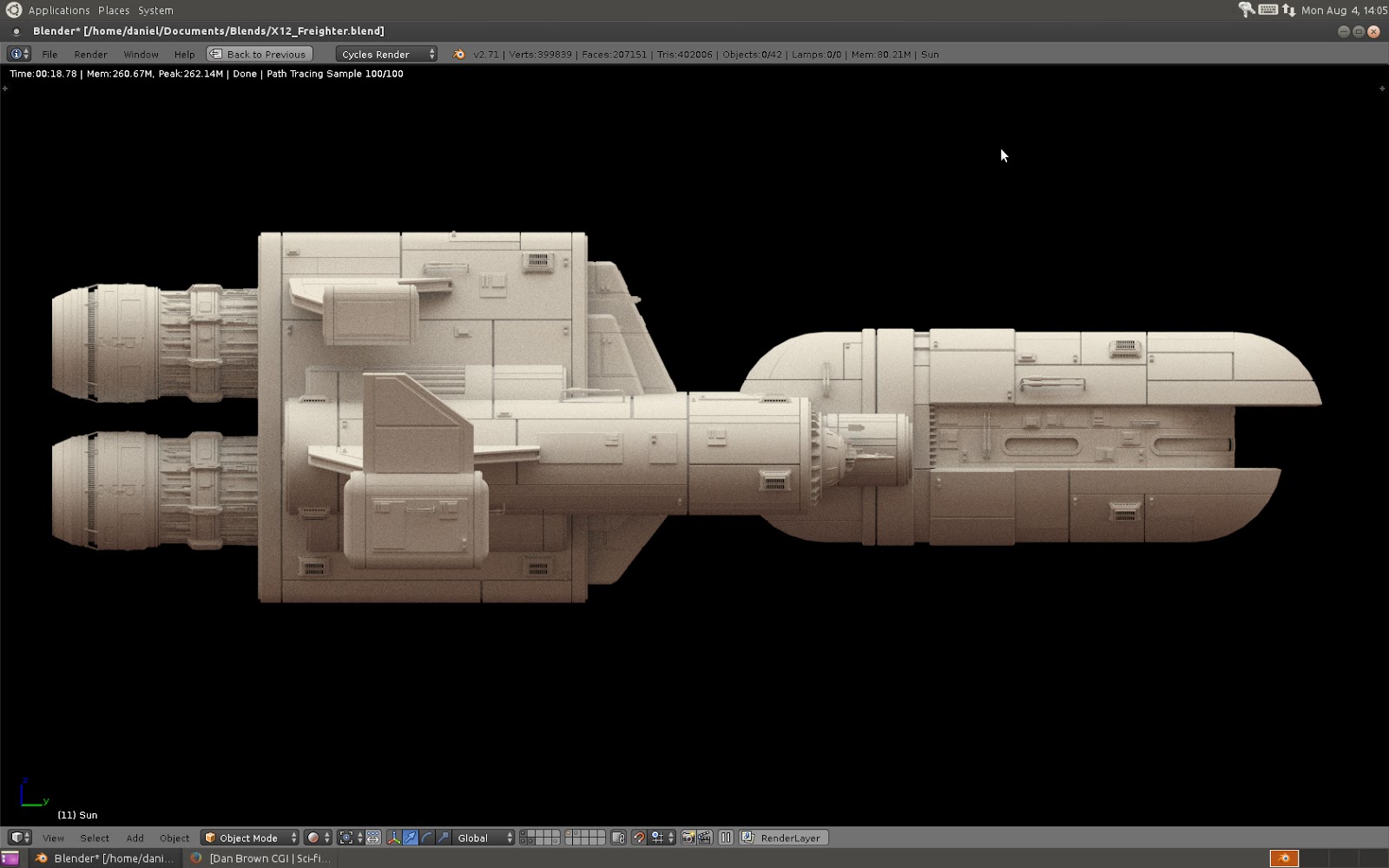 Obviously, still a long ways to go, but I really like her.  She's beautiful in my eyes. :)

Dan
Posted by DanBrownCGI at 11:15 AM No comments:

So, it finally happened.  My patched and sputtering old Ubuntu installation finally croaked.

And with it, unfortunately, went probably 5 gigabytes of data into the netherworld, including an entire project for a client...

On the plus side, the tutorial for CGCookie is about to work out, I suppose.  We'll see what they say.  I had so many technical issues with that thing, that's what preceded the need to upgrade.  In the upgrade, however, I failed to save every file...oh well.

So, it was clearly about time to upgrade my Ubuntu. Now, I'm getting used to 14.04, trying to figure out what I will do to repair the damage, and languishing in horror at the lost data, realizing I'm about to do hours of work for free.

Dan
Posted by DanBrownCGI at 1:39 PM No comments: